The Secret of the Flames (Table of Contents)

Cover title does not match interior story title. Art was previously credited to Franco Picchioni. However that is unlikely since Picchioni was born in 1942. 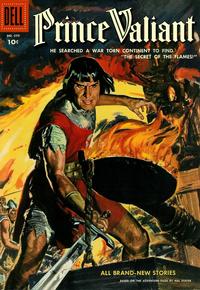 Another Outstanding Award for Dell Comics (Table of Contents: 1) (Expand) /

Prince Valiant and the Quest for Greek Fire (Table of Contents: 2)

Story continues on inside back cover in black and white and concludes on the back cover in color. Dell's "A Pledge to Parents" appears in the second tier of panels on the back cover, in the middle of the story. Script, pencils, and inks credits for this sequence from Alberto Becattini (May 14, 2007)
The French magazine Back Up n° 14 credits the pencils to John Buscema (GCD Error List, 29 March 2009), but according to the John Buscema checklist compiled by Jim Vadeboncoeur Jr and Michel Maillot this story is not by Buscema.