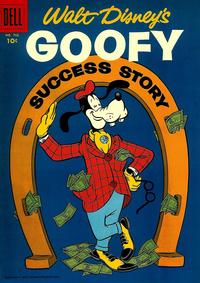 Inside front cover; black and white. Describes how to make an animation "flip book" from the panels on the back cover.

A comic book adaptation of the "Walt Disney Presents" episode "The Goofy Success Story." One sequence shows Goofy signing a contract as "Dippy Dawg," only to have the studio change his name to Goofy. Dippy Dawg was Goofy's original name in the 1930s cartoons. Another part is a parody of "Person to Person" with live TV cameras showing Goofy's mansion to a network audience. Part of the last panel is Dell's "A Pledge to Parents."

Genre
anthropomorphic-funny animals
Characters
Goofy
Synopsis
Goofy drives some nails through the back of a canvas to make his painting of cactus more realistic.
Reprints

Inside back cover; black and white; pantomime story.

Back cover. Twelve numbered panels that are to be cut out and assembled into an animation "flip book." Directions are on the inside front cover.