The Searchers (Table of Contents) 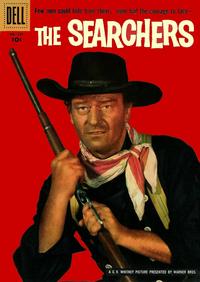 The Searchers (Table of Contents: 1)

Inside front cover; black and white. Seven photos from the movie plus a partial cast list.

The Searchers (Table of Contents: 2)

Story continues on the inside back cover in black and white and concludes on the back cover in color. The last panel is Dell's "A Pledge to Parents." This adaptation of the 1956 movie "The Searchers" is fairly faithful to the movie, though an early movie reference to Edwards possessing money from a railway robbery is omitted, as is the classic closing scene. Pencils, inks, and letters credits for this sequence from Alberto Becattini (May 14, 2007).