For America and Democracy (Table of Contents) 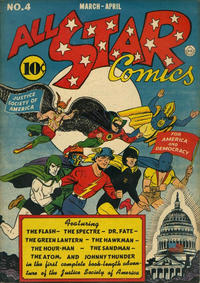 For America and Democracy! [Introduction] (Table of Contents: 2)

For America and Democracy! [Chapter 1] (Table of Contents: 3)

Genre
superhero
Characters
The Flash [Jay Garrick]; Fritz Klaver (villain, leader of 30,000 spies, mention only); the Grey Shirts (villains)
Synopsis
The Flash heads to manufacturing centers in Michigan and Wisconsin to put a stop to insidious work stoppages brought about by a group known as the Grey Shirts, who work for a mastermind named Fritz Klaver, who lives in Toledo, Ohio. The Scarlet Speedster destroys a source of their propaganda materials and prevents work stoppages and prevents the ship "Liberty" from being blown up with all on board.
Reprints
Keywords
Detroit (Michigan); Detroit Michigan; Liberty; Toledo (Ohio); Toledo Ohio; Wisconsin

The Flash Wins and Becomes the Next Quarterly Like Superman and Batman! (Table of Contents: 4) (Expand) /

For America and Democracy! [Chapter 2] (Table of Contents: 5)

Genre
superhero
Characters
Green Lantern [Alan Scott]; Irene Miller; un-named President of Apex Broadcasting; Krapek (German-American factory worker); Fritz Klaver (villain, mention only); The Baron (villain, death); other Fifth Columnists (villains, all die)
Synopsis
Green Lantern and Irene Miller investigate radio transmission interruptions, believed to be caused by foreign agents. Irene is captured and held aboard a giant dirigible, containing a machine that jams radio frequencies and hinders reception, and which is commanded by a man known as the Baron. G.L. attacks the dirigible and flies away with Irene and a fatally wounded Krapek with him, as the dirigible bursts into flames and burns.
Reprints
Keywords
Apex Broadcasting; Mysterious Lamp; oath; Rower Ring; Station WXF

The destruction scenes of the dirigible, found in panel 8 on page 6 and panel 1 of page 7, were clearly patterned after photos taken of the Hindenburg disaster at Lakehurst, New Jersey in 1937.

For America and Democracy! [Chapter 3] (Table of Contents: 6)

Genre
superhero
Characters
The Spectre [Jim Corrigan]; Fritz Klaver [aka The Leader] (villain, mention only); Hans (villain, death); Dorgoff (villain, death); other Fifth Columnists (villains, some die)
Synopsis
The Grim Ghost travels to Pittsburgh, Pennsylvania, to investigate the sabotage of munitions factories there, and catches a Fifth Columnist worker sabotaging gun barrels with steel wool. He is rescued by his buddies, but shot for failing. The Spectre discovers future plots to blow up a factory and steal the Army's new gun plans, and makes sure each fail. Suddenly he is drawn into the occult world where brilliantly colored rays seek to destroy him. But he uses the Ring of Life to overcome them.
Reprints
Keywords
Forman Factory; Pittsburgh (Pennsylvania); The Ring of Life

For America and Democracy! [Chapter 4] (Table of Contents: 7)

Genre
superhero
Characters
The Hour-Man [Rex Tyler]; Fritz Klaver (villain, mention only); Captain Erdner (villain); The Grey Shirts [Masters; rest un-named] (villains)
Synopsis
Hour-Man heads for Oklahoma to disrupt the plans of a Captain Erdner, who is planning to dynamite all oil wells within that state. Rex is hired on at one of the oil field facilities where four guards have been found murdered. Aware he is being set up by the Grey Shirts, Tyler switches to Hour-Man, pops a Miraclo pill, and rounds up the villains and saves a well from destruction.
Reprints
Keywords
Miraclo; Oklahoma; Ryan Oil Fields

For America and Democracy! [Chapter 5] (Table of Contents: 9)

Genre
superhero
Characters
Dr. Fate [Kent Nelson]; The Sandman [Wesley Dodds] (cameo); The Flash [Jay Garrick] (cameo); un-named FBI agents; Fritz Klaver (villain, mention only); The Grey Shirts [Carl; rest un-named] (villains)
Synopsis
Dr. Fate is ordered to New England to look for sabotage at the naval yards along the Atlantic Seaboard, sending out a Cloud of Darkness to seek out evil. And find it it dies, aboard fishing smacks with Grey Shirts on board, whom Fate overcomes. When they refuse to talk, he summons up horrible beasts from the deep to "convince" them to tell all they know. Fate then sends out his Cloud of Darkness to summon the FBI to take them into custody, then Fate consults his crystal to learn the identity of the leader of the villains before warning Sandman and the Flash about Klaver.
Reprints
Keywords
Cloud of Darkness; crystal ball

For America and Democracy! [Chapter 6] (Table of Contents: 10)

Genre
superhero
Characters
The Sandman [Wesley Dodds]; Dr. Fate [Kent Nelson] (cameo); un-named newspaper editor; un-named Secretary of the newspaper editor; Bill (reformed Grey Shirt, brother of the newspaper's Secretary); Fritz Klaver (villain, mention only); The Grey Shirts (villains, some reform)
Synopsis
Sandman heads for El Paso to help out the editor of a newspaper there, who has been receiving threats because he dares write editorials criticizing dictator nations. Wes Dodds first of all impresses young American recruits of the Grey Shirts that they are being a line of baloney when their leaders try to convince them to overthrow America from the inside. Sandman leads the redeemed Grey Shirts to stop the villains trying to destroy the newspaper.
Reprints
Keywords
El Paso; El Paso Patriot; Gas Gun; Wirepoon

Genre
humor; superhero
Characters
Johnny Thunder; Mrs. Darling (Daisy's mother); Daisy Darling; The Thunderbolt [Archibald]; Doris Palmer; Mogi the Marvelous (villain)
Synopsis
Daisy and Johnny are on their way to a birthday party, aware that a lot of jewelry robberies have occured in town recently. Daisy insists that Johnny go with her to a fortune-teller named Mogi, the Marvelous, first. Johnny calls the Mogi a fraud, and, later it proves true when Daisy's pearls disappeared, and Johnny faced off with Mogi, knowing that he had them.
Reprints
Keywords
Appleville; Say You

The Thunderbolt is yellow in this story.

For America and Democracy! [Chapter 7] (Table of Contents: 14)

Genre
superhero
Characters
Hawkman [Carter Hall]; Shiera Sanders; Mr. Finney (Aviation Research Department scientist); Fritz Klaver (villain, mention only); The Grey Shirts (villains)
Synopsis
The Flying Fury travels to California to prevent spies from stealing the designs of a new speedy plane being developed at an aviation plant called the Flying Fortress. After its pilots are gassed, Hawk saves the plane and crew. Meanwhile, Shiera decides to visit California and jumps from a plane, hoping Hawkman will save her. He does, and while she does research on the strange gas used on the pilots, Hawkman rounds up the spies.
Reprints
Keywords
California

For America and Democracy! [Chapter 8] (Table of Contents: 15)

Genre
superhero
Characters
The Atom [Al Pratt]; Fritz Klaver (villain, voice only); Hans (villain); Buddy (villain); The Grey Shirts (villains)
Synopsis
Atom heads for Tri-State College to prevent foreign students, being sent there by enemy nations, from indoctrinating American students. He breaks up attempts of beating up college students, but the enemy devises new ways of indoctrination, including the use of the Grey Shirts to beat up Al Pratt. Atom takes care of them and makes his way to Toledo, coming face to face with Fritz Klaver.
Reprints
Keywords
Fatherland Club; Tri-State College

For America and Democracy! [Conclusion] (Table of Contents: 16)