I, the Pharaoh! (Table of Contents) 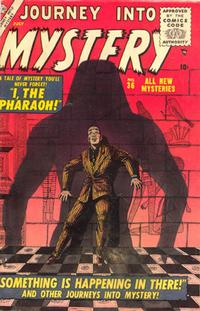 I, the Pharaoh (Table of Contents: 1)

Job Number
J-522
Genre
horror-suspense
Synopsis
This story starts in the present and depicts a man dreaming that he is a Pharaoh and ends in the past with the Pharaoh recovering from a delusion where he thought he was a man from 1956.
Reprints

Art credits from Saltarella via the GCD Error Tracker and atlastales.com. Wessler credit from his record books, per Robin Snyder's the Comics, Vol 25, No. 6, June 2014.

He Hides Among Us (Table of Contents: 2)

Job Number
J-483
Genre
science fiction
Synopsis
A doctor raises a Martian child among humans as an experiment. When a young man breaks several athletic records, his rival for the affection of a young girl digs through the doctor's records attempting to prove his suspicions regarding alien origin. The doctor catches him going through the files and confronts the snoop with the knowledge that he might be the alien since he does not remember his parents, and the man leaves town to kept the secret quiet. At the wedding of the athletic man and the young girl, the doctor's thoughts reveal that it is the girl who is the Martian.
Reprints

The Floating City (Table of Contents: 3)

Job Number
J-433
Genre
science fiction
Synopsis
An architect builds a bridge that collapses but is approached by an alien who appreciates his daring and contracts him to build a suspended city in the desert.
Reprints

Something Is Happening in There! (Table of Contents: 4)

Job Number
J-580
Genre
science fiction
Synopsis
A yokel thinks his neighbor has a time machine in his barn, but it's really just a new design for a car wash.
Reprints

The Lost Land (Table of Contents: 6)

Job Number
J-390
Genre
horror-suspense
Synopsis
People living in paradise test potential new recruits with a pile of gold. If they take any, they are expelled.
Reprints

The Beasts! (Table of Contents: 7)