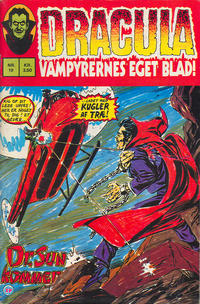 An edited version of page 5, second panel of the story "Tomb of Dracula #20 (Marvel): The Coming of Doctor Sun" used as background illustration

Picture from "The brides of Dracula (1960)" - with added speech bubbles

4 cartoons:
In the desert
1944 was a good year
At the bank
Watching vampire movie

Job Number
B-495
Genre
horror-suspense
Synopsis
When a bank-robber's partner runs out on him and leaves him behind for the police, his ghost fools the sap with false promises of stolen money hidden in the alligator pit into getting devoured.
Reprints

Job Number
E-599
Genre
horror-suspense
Synopsis
A thug hatches a plan to dognap a wealthy man's seeing eye dog for ransom, but it turns out that the man can see and the dog is actually a blind retired werewolf.
Reprints

Monster's vocal cords are paralyzed in this story.