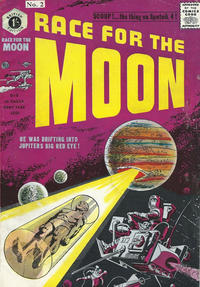 Island in the Sky (Table of Contents: 1)

Genre
science fiction
Characters
Bill Fenner; Mike Baker; Doctor Johnson
Synopsis
Bill Fenner hated the Red Spot of Jupiter. An accident in space kills Bill and his body is fired into Jupiter. The Red Spot returns Bill's body in a transparent cylinder. When the cylinder is opened Bill sits up unaware of anything that has happened to him. After an electrical blow-up, when Bill takes all the power in his body, and then returning from an outside job in space with an empty oxygen tank, Bill is taken by the medics for examination. There is a small organism in his brain which protects him. Bill's body is better than new and he might live to 1000.
Reprints

The Thing on Sputnik 4 (Table of Contents: 2)

Genre
science fiction
Characters
Captain Kelly; Major General Holt; Bio-Chemical Lab Technician
Synopsis
A triangular meteor is captured and brought on board a space station. Captain Kelly cuts into the meteor and finds a walnut shaped object inside. Major General Holt cautions Kelly against thinking they've found life. The lab technician investigates further but then there's a beep-beep sound and an explosion rocks the lab. There are more explosions accompanied by the beeps. Kelly is outside and sees an old Sputnik satellite which is beeping and then sees a space creature clinging to it. The walnut object appears and reunites with the space creature and they fly off in a triangular meteor.
Reprints

Turmoil in the Heavens! (Table of Contents: 3)

The Golden Rocket (Table of Contents: 4)

Genre
science fiction
Characters
Space Station Commander; Space Station Crewman
Synopsis
A rocket floating in outer space comes near to a space station. The commander is unwilling to take it on board and radios to the rocket for the inhabitants to show their faces. The crewman says he thinks it is unmanned and so they bring it on board. They open the rocket up and find that all the materials inside are unknown to them. There is a radio which shows signals are being received. The crewman says that the signals are coming from Pluto. But it is thought that nothing could be living on Pluto.
Reprints

Genre
science fiction
Characters
Ward Stratton (American Lunar Mineralogist); Colonel Alexandrovna (Russian Commandant); Petrov (Russian Soldier)
Synopsis
Ward Stratton is caught in a trap in Lunar Crater Tycho. He is arrested and taken to Colonel Alexandrovna who accuses him of being a spy and saboteur. Stratton is pleased that this is a lady but denies this. Alexandrovna orders Petrov to take Stratton to the site of the damage. Stratton again denies that it was his fault and Alexandrovna threatens to shoot him if he does not confess. Rocks rain down on the car and the pair just escape into a cave. They see that the assailant is a moon creature. A Russian rescue party drives the creature away and Alexandrovna and Stratton shake hands.
Reprints

The Face on Mars (Table of Contents: 8)

Genre
science fiction
Characters
Ben Fisher; Koski; Brennan; Lake
Synopsis
The group of four are climbing a gigantic carved statue of a face found on Mars. Fisher steps through an eye socket and finds himself in a lush green city with breathable air and sees giant Martians. A fleet of spaceships attack and destroy the city. The giants have a meeting and point to a space map - there is a planet between Mars and Jupiter. The giants launch a missile to destroy this planet. Fisher suddenly can't breathe properly and then he is found on the surface of modern day Mars. On their way through space they stop in the asteroid belt - the remnants of a destroyed planet.
Reprints

Genre
fantasy-supernatural
Characters
Bart Wallace [called Bert Wallace on first page]; Pedro (Mexican local)
Synopsis
Bart Wallace is sightseeing in Camerillo, Mexico. He mocks Pedro who talks about strange happenings. Suddenly Pedro is pulled into the air by a blue light, Wallace grabs hold and both are dropped when a USAF plane spooks their captor. Wallace thinks it strange that a plane could scare an interplanetary craft. Wallace searches for weeks for the strange light and when he eventually does see it shoots it with a rifle. The light moves over Camerillo which catches fire. It's not a craft but a space animal and flies away. Wallace remains searching for evidence, the only man left in Camerillo.
Reprints

Genre
science fiction
Characters
William Barnes (space captain); Second in command
Synopsis
A star ship coming in to land clips a communication tower. The captain says everyone is OK and he still has to land the ship. Men who fly star ships have to have excellent reflexes. The captain says that the landing should be all right but then overshoots the landing field. The second in command offers to take over but the captain says he's not too old to fly the ship and he's not ready to retire yet. Another approach takes them too close to a tower so the captain reluctantly hands control over. He leaves the ship knowing that was his last flight. He is now too old - at the age of 19.
Reprints

Genre
fantasy-supernatural
Characters
Eric Burnside (police detective); Chief of Police; Panama Pete (criminal); Indian Fakir
Synopsis
Eric Burnside is not a successful detective. His chief sends him to India to chase after Panama Pete, a dangerous criminal. Eric asks a fakir if he knows where Pete is, the fakir points up a vertical rope. Suddenly Pete shoots at Eric, Eric pursues Pete through the market but loses him. Back with the fakir Eric climbs up the rope into clouds. The rope falls down as the fakir stops playing. Eric chases Pete through a strange land and, when he catches him, Pete has grown old. Pete is taken back to the USA where fingerprints prove who he is. After 10 years in prison he is now very old.
Reprints

The Man Who Never Smiled (Table of Contents: 12)

Genre
fantasy-supernatural
Characters
Phil Fenton; Cedric Bradby; Gladys Lloyd; Mr Lloyd (Gladys's father); Two Hoodlums; Policeman
Synopsis
Mr Bradby gives Phil a final warning for misdelivering flowers. Phil is sent to deliver flowers to a theatre. He goes up an alley and then hears voices. Gladys Lloyd and her father are being threatened by two armed hoodlums. Mr Lloyd grapples with a hoodlum and a bullet nearly hits Phil. Phil turns to run when Gladys begs him not to go. He punches a hoodlum who disappears and then only Gladys is left. A policeman tells Phil that the Lloyds were killed 20 years ago. It's too late for a flower delivery and Phil is fired. He returns to the house where he hears Gladys's voice and smiles.
Reprints

The lead character is drawn to look like Frank Sinatra, and his boss to look like Arnold Stang, who together starred in the film The Man With The Golden Arm in 1955.

First Line of Dialogue or Text
And don't forget to write me twice a week!
Genre
humour
Reprints

Genre
science fiction
Characters
Ken Scott; Claire Nichols; Edmond Nichols [also spelled Edmund in the story] (Claire's father)
Synopsis
Inside a truck Claire tells Kevin that she doesn't love him. Edmond pretends to be asleep in the back. Later Edmond explains the equipment on the truck is to induce vegetation to yield food for eating. After operating the equipment they find themselves in a lush jungle - the experiment has worked. They see a giant bison, a pterodactyl and a monster snake - they have gone back in time. They rest in a cave where Claire tells Ken that she loves him. Ken then saves Claire from a dinosaur. When they wake up Edmond realises they had shrunk and did not go back in time but Claire doesn't mind.
Reprints

Genre
science fiction
Characters
Hammond Drake; Rat leader; The General (a bulldog)
Synopsis
Drake travels to 2514 AD. He finds dead tigers in a field. A rat tells him that all humans were killed in an atomic war and that animals inherited the earth. Drake is knocked out and back at their lair they demand the secret of making atom bombs. Suddenly the lair is attacked knocking Drake out. He wakes up in a bed with a dog, fox and bear at his side. The General enters the room and tells him that only rats want to continue fighting, everyone else wants peace. Drake gives him the secret of atomic bombs. Drake travels back to the present hoping that dogs will be better than rats.
Reprints

Genre
science fiction
Characters
Jerad (Space fleet commander); Mord [called Moro on first page] (Second in command); Mary; Mary's husband
Synopsis
A space fleet approaches Earth, they have conquered many planets before. Mord thinks Earth will not be as easy to subdue but Jerad disagrees. An advance party confirms Jerad's opinion. Jerad lands in a field and approaches a farm to see the fear they strike. Mary answers the door and tells them to get off her flowers! She's not afraid of them and knows what they're here for and everything that can be damaged has been removed. Jerad thinks they have fallen in to a trap and they flee. Mary's husband returns. Mary tells him that the actors who were going to make a space movie have gone.
Reprints