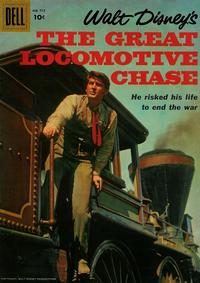 Strategy for Heroes (Table of Contents: 1)

Genre
non-fiction
Synopsis
Facts about the Civil War raid that the main story is based on. Includes maps of where the action takes place.

Inside front cover; black and white. Maps and typeset text.

Story concludes on inside back cover in black and white. Last panel is Dell's "A Pledge to Parents." Based on the 1956 Walt Disney motion picture "The Great Locomotive Chase," which was based on a true event in the Civil War. Script, pencils, and inks credits for this sequence from Alberto Becattini (May 14, 2007).

Vacation Time is All Too Short (Table of Contents: 3) (Expand) /