The Challenge of Zorro (Table of Contents) 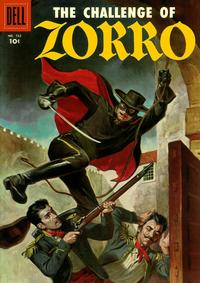 Inside front cover; black and white. Text with parts of panel art from the story reproduced.

Illustrated preview of the story contained in the issue.

The Challenge Of Zorro (Table of Contents: 2)

Job Number
O.S. #732-5610
Genre
adventure; historical; western-frontier
Characters
Zorro [Don Diego Vegas]; Bernardo; Don Alejandro Vegas; Panchita Conchola; The King; Maria Bourbon [as Senorita Gomez] (heir to the Spanish throne); De Riez (villain, the Royal Physician)
Synopsis
A mysterious woman, who bears a striking resemblence to the King of Spain, comes to Don Diego, claiming to be the secret twin sister of the King. She convinces Don Diego, accompanied by Bernardo and chaperoned by Diego's fiancé, Panchita, to sail with her to Spain, where the King is slowly dying. In Spain, Zorro must rescue the King from an intricate conspiracy to steal his throne.
Reprints
Keywords
Alta California; Spain

Story concludes on inside back cover in black and white.

Pencils, inks, and letters credits for this sequence from Alberto Becattini (May 14, 2007).

Zorro wears a red mask in the story.

The name of the lead character, Don Diego, was changed by the writer to Don Diego Vegas instead of the customary Don Diego Vegs as found in most issues.

First Line of Dialogue or Text
Fencing is a skilled art...
Genre
non-fiction; sports
Synopsis
Descriptions of the four basic positions of fencing.

Back cover. Illustrations and typeset text.