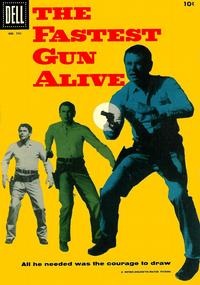 Inside front cover; black and white. Four photos from the movie with a partial cast list.

Genre
western-frontier
Characters
George Temple; Dora Temple; Vinnie Harold (villain)
Synopsis
Whenever it becomes known how good he is with guns, George Temple and his wife Dora have to flee the town, in fear of all the gunmen who might want to challenge him. Unfortunately George can't keep his secret after a visitor spends the morning telling the townsfolk about Vinnie Harold, who just shot Clint Fallon, the "fastest gun alive," in a nearby town. George demonstrates his skill by hitting two flipped silver dollars in mid-air, but later regrets it and plans to leave. In the Sunday morning church service, all the town's citizens swear to keep his secret and support his plans to give up his guns forever. However a boy tells the story to a trio of wanted criminals--led by Vinnie Harold. Harold threatens to burn down the whole town, if George doesn't duel him.

Story concludes on inside back cover in black and white. Last panel is Dell's "A Pledge to Parents." Alberto Becattini notes: "The name "R.Jenney" appears on page 3, panel two. The name Al McWilliams appears on Page 29, panel four. McWilliams might have contributed to the artwork."