title changes to War at Sea 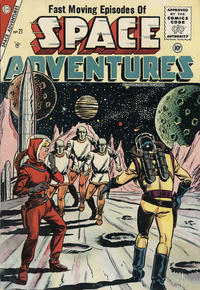 Art was previously credited to Dick Giordano but Nick Caputo sees no sign of his work. Nick notes faces and figures that point to Pete Morisi's involvement, but if so, the inker has obscured his work considerably.

Anyone Could Have Done It (Table of Contents: 3)

Meddlers from Mercury (Table of Contents: 4)

This appears to be an inventory page, perhaps from Fawcett.

The Peace Planters (Table of Contents: 6)