The Desperate Jeeters (Table of Contents)

Photo may be hand-colored. 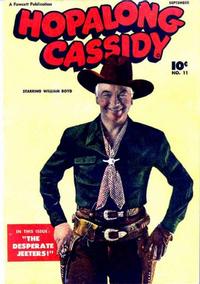 Table of contents with illustration. Also list of Fawcett comics.

The Desperate Jeeters (Table of Contents: 3)

Horsing Around (Table of Contents: 4)

Time to Leave! (Table of Contents: 6)

Pistol Packin' Pattie Nails One Down (Table of Contents: 7)

The Lost Bet (Table of Contents: 9)

The High-Jumping King (Table of Contents: 11)

Hopalong just makes brief appearances at the start and end of the story.

A Natural Answer (Table of Contents: 14)

Genre
humor
Synopsis
A man gets sent on a fool's errand.

A Bandit for Tubby (Table of Contents: 15)

Genre
western-frontier
Characters
Tubby Taylor; The Black Bandit; Al Greenan
Synopsis
The Black Bandit always strikes on days when the wind will blow sand to fill in his tracks. Sheriff Tubby Taylor sets a trap for him when the banker blurts out that the sheriff is holding the bank's gold in his safe.
Keywords
bank robbery; booby trap; safe; wind

Text story with one small illustration.

The Last Laugh (Table of Contents: 16)

Genre
humor; children
Characters
Peewee Pete; Mr. Smith
Synopsis
Pete sets up practical jokes in a conference room for his club's meeting, but the boss, Mr. Smith, decides to have a meeting with bankers in that room earlier in the afternoon.
Keywords
bankers; practical jokes

Cavalier of the Plains (Table of Contents: 17)

Genre
western-frontier
Characters
Hopalong Cassidy; Mesquite (cameo)
Synopsis
A man disguises himself as "The Cavalier of the Plains" get revenge on a man for framing him for robbery 20 years ago in France and having him sent to prison.
Keywords
Count of Monte Cristo; Devil's Island; frame; France; robbery; sword

A plot point in "The Count of Monte Cristo," is referenced in the story.