The Mysterious Avenger (Table of Contents) 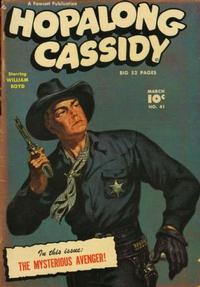 The Mysterious Avenger (Table of Contents: 2)

Genre
western-frontier
Characters
Hopalong Cassidy; Topper (horse); Glenwood (crooked rancher); Dickson (rancher(
Synopsis
Hoppy has to find out who tries to scare honest ranchers out of Twin Rivers to get their oilrights.

Certa is credited on Hopalong Cassidy by Jerry Bails' Who's Who. The faces of the crooks, with long mustache, wavy eyebrows and marked cheekbones, is typical of Certa. Very similar to many of his Durango Kid stories.

Rocky Lane rounds up the Redskins! (Table of Contents: 4) (Expand) /

The Ranch Rustler! (Table of Contents: 6)

Quinlan is credited on pencils on Hopalong Cassidy by Jerry Bails' Who's Who, and the art with movement and faces, is very similar to his credited story in Catman #25 and 26a. Inking looks a bit like Elkan, but uncertain.

Notes as for the first Certa story.