The Ghost Rider! (Table of Contents) 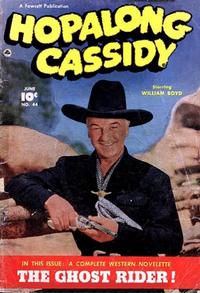 The Ghost Rider (Table of Contents: 2)

Certa is credited on Hopalong Cassidy by Jerry Bails' Who's Who. The bony faces, hats and movement are all typical of Certa. Very similar to many of his Durango Kid stories.

The Popsicle Hall of Fame (Table of Contents: 4) (Expand) /

Synopsis
Let's see how bright you are.

The Triple Cross (Table of Contents: 10)

Dress up Just Like Hopalong Cassidy (Table of Contents: 11) (Expand) /

The Chimney Sweep (Table of Contents: 12)