Trouble in Triplicate! (Table of Contents) 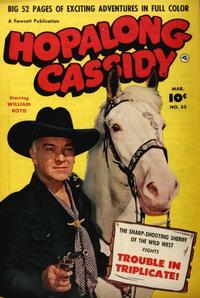 Inside front cover missing from scan.

Trouble in Triplicate (Table of Contents: 2)

Gunning for Trouble (Table of Contents: 3)

First Line of Dialogue or Text
This is a quiz that will really test your brainwork...
Characters
Dean Acheson

The Outrageous Coyote (Table of Contents: 9)

Terror at the Carnival (Table of Contents: 10)

Quinlan is credited on pencils on Hopalong Cassidy by Jerry Bails' Who's Who, and the art with movement and faces, is very similar to his credited story in Catman #25 and 26a.

Genre
humor
Characters
Hill Billy
Synopsis
Billy don't like the dictionary, because it changes the subject too often.
Reprints

First Line of Dialogue or Text
This is a quiz that will really test your brainwork...
Characters
Julius Caesar

Genre
humor; western-frontier
Characters
Pattie; Cooper
Synopsis
She calls him Dandruff because he gets in her hair.

For the First Time in a Comic Magazine! (Table of Contents: 17) (Expand) /

First Line of Dialogue or Text
Some day to send us out on the range!
Genre
humor; western-frontier
Characters
Foreman; Cook; Tim
Synopsis
Tim is trying to make the foreman complain so he can win a bet.

The Last of the Bioux (Table of Contents: 19)

Genre
western-frontier
Characters
Hopalong Cassidy; Topper (horse); Running Beaver; Mesquite (deputy); Chief Toro
Synopsis
The Swangee tribe has a cunning plan to wipe out the Bioux tribe to take over their land for themselves.

Elkan is credited on Hopalong by Jerry Bails' Who's Who, and some faces, as the scared chief, flimsy inking of Hoppy's hair, and much of the movement is not far from his other stories in this series, but not certain.

Whole back cover missing from scan.