The Desperate Chase! (Table of Contents) 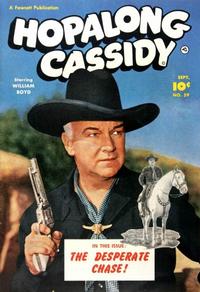 The Desperate Chase (Table of Contents: 2)

Genre
western-frontier
Characters
Hopalong Cassidy; Topper (horse); Mr. Haskens (rancher); Bandit
Synopsis
Hopalong is pursuing a bandit who has blown up a safe and escaped on a cattle boat.

Return to the Law (Table of Contents: 5)

Genre
humor; western-frontier
Characters
Whitey Whiskers; Waiter; Cook
Synopsis
Whitey eats in a restaurant and pretends to be sick from the food just so he won't has to pay for it.

What Builds a Champion Builds You! (Table of Contents: 8) (Expand) /

First Line of Dialogue or Text
Get your thinking caps on and try to beat the quizmaster
Characters
Babe Ruth; Grover Cleveland