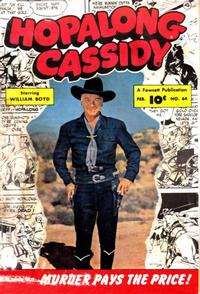 Genre
humor; western-frontier
Characters
Hill Billy; Abner
Synopsis
Billy learns his nephew the difference between a "b" and a "d".

Man of the Sea (Table of Contents: 6)

Genre
humor; western-frontier
Characters
Whitey Whiskers; Mr. Crabtree (editor)
Synopsis
Whitey is always broke, and when The Sentinel offers five dollars for an interesting true story, he makes one up.

The Mine Disaster (Table of Contents: 7)

Elkan is credited on Hopalong by Jerry Bails' Who's Who, and faces with eyes sometimes out of line and wavy inklines in hair are clues to Elkan.

Genre
humor; western-frontier
Characters
Pattie; Sloppy Joe
Synopsis
He should buy a refrigerator to keep the food on his shirt from spoiling.
Reprints

First Line of Dialogue or Text
See how many you can answer...
Characters
John C. Calhoun; King Arthur

Now You Can Get Hopalong Cassidy Each Month, By Mail (Table of Contents: 12) (Expand) /

The Assassin's Treachery (Table of Contents: 14)