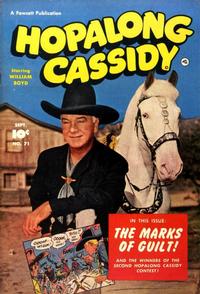 Hopalong Cassidy and the Case of the Mysterious Locksmith (Table of Contents: 2)

Certa is credited on Hopalong Cassidy by Jerry Bails' Who's Who. The bony faces with long mustachio, and hats and movements are all typical of Certa. Very similar to many of his Durango Kid stories.

Genre
humor; western-frontier
Characters
Hill Billy; Farmer Brown
Synopsis
Billy wants to put his heifer in on farmer Brown's pasture for two weeks to fatten her up and pay for it.

King of Corn (Table of Contents: 6)

Hopalong Cassidy and the Marks of Guilt! (Table of Contents: 7)

Genre
western-frontier
Characters
Hopalong Cassidy; Topper (horse); Fred Burr (partner); Rollins (crooked partner); Saxon (drifter and painter)
Synopsis
One of the ranch partners is accusing the other of trying to kill him to get the whole ranch for himself.
Reprints

Elkan is credited on Hopalong by Jerry Bails' Who's Who, and faces with eyes sometimes out of line and wavy inklines in hair are clues to Elkan.

No Halfway Measures! (Table of Contents: 9)

Flint was indoors for one day and went half crazy. Pattie wonders if he weren't indors for two days.

Genre
western-frontier
Characters
Hopalong Cassidy; Topper (horse); Mesquite (deputy); Glynn (crooked editor)
Synopsis
The city hall has been set on fire to destroy certain documents, but Hoplaong saves them and will find out why.
Reprints

Notes as for the first Certa story.

First Line of Dialogue or Text
Wal,wal, so I'm in abig city at last!
Genre
humor
Characters
Fuller
Synopsis
Fuller had never heard of Billiards before. Thought it must be a drink.
Reprints