On-sale date from Amazing Heroes #114, listed as Classic Conan #2.
This issue has variants: 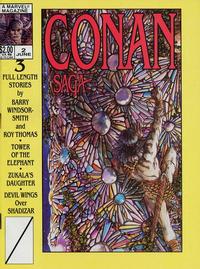 [frontispiece - pencils for cover without cropping for text] (Table of Contents: 1)

Tower of the Elephant (Table of Contents: 3)

This is a hand drawn version of the map used in the "Nemedian Chronicles" intro page of many issues of Savage Sword of Conan. That map first appeared in Savage Sword #06 (Jun 1975). Another version appeared in Marvel Comics Super Special #02 (1977).

Genre
sword and sorcery
Characters
Conan; Fafnir; Jenna; Nubion; Maldiz; Hajii the Priestess; the night god
Synopsis
In Shadizar, Conan meets the beautiful waitress Jenna. She is however kidnapped by religious fanatics and taken to be sacrificed to the mysterious night god. The god no-one has ever seen is revealed to be a gigantic bat-like creature. Conan saves Jenna from the bat creature, while Jenna in her turn saves Conan from the priestess Hajii. Jenna then steals all his gold and leaves...
Reprints
Keywords
Shadizar the Wicked