On-sale date from Amazing Heroes #121.
This issue has variants: 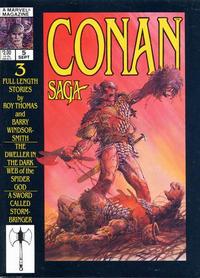 [frontispiece - pencils for cover without cropping for text] (Table of Contents: 1)

Dweller in the Dark (Table of Contents: 3)

Genre
sword and sorcery
Characters
Conan; Yulek; Queen Fatima; Yaila
Synopsis
Conan becomes Captain of the royal guard in the small city-state of Zahmahn as well as the lover of Queen Fatima. When the Queen catches Conan with the servant girl Yaila in a delicate situation, she leaves them in the dungeon to be devoured by the Dweller in the Dark. They manage to escape, however, and Conan throws the Queen to the monster. According to tradition, Zahmahn can only be ruled by a female sovereign, so Conan nominates Yaila as the new queen.
Reprints
Keywords
Corinthia; Zahmahn

Barry Smith confirmed as inker in letters page of Conan the Barbarian #16.
Page 15 appears here in its original uncensored form (prior publications featured a partially redrawn version due to Comics Code objections).

[unpublished version of the cover for Conan the Barbarian #13] (Table of Contents: 4)

Web of the Spider-God (Table of Contents: 5)

The Hyborian Age of Conan (Table of Contents: 6)

Hyborian Regional maps done in five sections. Based on a map by Robert E Howard. This is the centerfold.