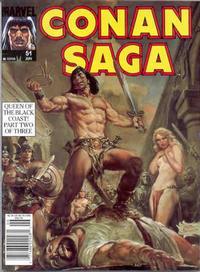 The Ballad of Belit! (Table of Contents: 1)

Genre
sword and sorcery
Characters
Conan; Black Corsairs [Bêlit (origin); M'Gora; N'yaga the Shaman]; nameless Stygian priest; King Athrahasis (Belit's father, in flashback, dies?); the Shemite Royal Guard (in flashback); King Nim-Karrak (Belit's uncle, in flashback); Chief Uzumi (dies, in flashback); Bird-Riders; Birds-That-Run; Derketa [Goddess of Death] (mentioned, in flashback); Dagon (mentioned, in flashback); Blood-Crazed Baboon (in flashback, dies); Man-Eating Leopard (in flashback, dies); Mound-Dwellers (in flashback)
Synopsis
Conan hears the story of Bêlit from N’yaga's lips. Bêlit is the rightful heir to the throne Asaglun. When she was a child, her uncle Nim-Karrak overthrew and killed her father, the king. N'yaga saved her life and rejoined his tribe, where he spread the legend that Bêlit was the daughter of Derketa, goddess of death. Bêlit grew up to become the best warrior of the tribe. The jealous Chief Uzumi sent her on a suicide mission to reclaim a relic from the Mound-Dwellers, but ended up getting killed himself. As the new chief, Bêlit turned to piracy in order to raise funds for her revenge.
Reprints
Keywords
Asgalun (city-state); Khemi; Kush; Liquid Silver; Shem; Silver-Eye of Dagon; Stygia; the Silver Isles; Tigress (ship)

Riders of the River-Dragons (Table of Contents: 2)

Kull of Atlantis (Table of Contents: 5)

These are storyboard samples from a proposed Comic Paperback. Quotations are from the story "Exile of Atlantis".