The Volcano (Table of Contents) 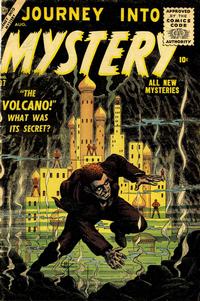 The Deep Freeze (Table of Contents: 1)

Job Number
J-526
Genre
horror-suspense
Synopsis
Three crooks place themselves in suspended animation for 200 years after stealing 150,000 dollars. Not only is the money still good in 2156, not only is 150,000 still a lot of money in 2156 (gasp!), but the only reason they run afoul of the law is that the suitcase of money they stole was counterfeit to begin with.
Reprints

Job Number
J-812
Genre
horror-suspense
Synopsis
A man introduces technology to a primitive people living at the base of a volcano and the volcano becomes angry at their new competitive and mistrustful nature so wipes out their society.
Reprints

Inside the Whirlpool (Table of Contents: 3)

This story's plot is similar to Star Trek's "Mirror, Mirror" but the depicted events are used to make a thief feel shameful of his behavior.
Artist credits from Marvel Masterworks: Atlas Era Journey Into Mystery (Marvel, 2008 Series) #4.

The Voice in the Night (Table of Contents: 4)

Job Number
J-827
Genre
horror-suspense
Synopsis
When a man slugs an elderly man collecting donations for the poor and steals the poor box, his conscience bothers him so much that he hears a clock accuse him of being a thief.
Reprints

The Old Shop (Table of Contents: 5)

The Sea Serpent! (Table of Contents: 6)

Job Number
J-788
Genre
horror-suspense
Synopsis
A sailor sees a sea serpent arise when there is a disaster to be averted.
Reprints

The First Man (Table of Contents: 7)

Job Number
J-800
Genre
science fiction
Synopsis
The author of this story postulates that a series of satellites will be required to use as refueling stations on the way to the moon. Once they are built, and rockets make it to the moon, men find that the moon itself is an inhabited satellite built by alien beings.
Reprints