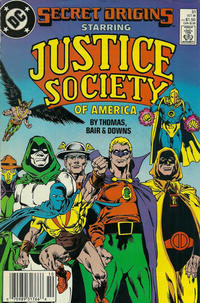 The Secret Origin of the Justice Society of America (Table of Contents: 1)

Job Number
G-3106
Genre
superhero
Characters
Justice Society of America [Atom [Al Pratt]; Sandman [Wesley Dodds]; Spectre [Jim Corrigan]; Flash [Jay Garrick]; Green Lantern [Alan Scott]; Hourman [Rex Tyler]; Doctor Fate [Kent Nelson]; Hawkman [Carter Hall]]; Franklin Delano Roosevelt; Adolph Hitler; The Murder Machine; Nazi spies; Valkyries (summoned by Hitler's Spear of Destiny) (villains)
Synopsis
This is a post-Crisis retelling of the JSA's origin, omitting the Earth-2 Batman and Superman appearances from the story itself. Although Batman was easily eliminated, Superman wasn't, because of his last minute rescue of FDR from the Valkyries' attack pre-Crisis. As a result, FDR was killed, but the Spectre was able to return him to life with the stipulation that FDR wouldn't live long enough to see the end of World War 2, known only to the Spectre himself. Things returned to normal, with nobody the wiser of FDR's "death" save one.
Reprints
Keywords
Spear of Destiny; World War II

Adapted from the story in DC Special (DC, 1975 series) #29 (August-September 1977), but updated to include post-Crisis continuity in which Superman and Batman never founded the team alongside the others.