This issue is a variant of Secret Origins (DC, 1986 series) #8 [Direct]. There exist further variants. 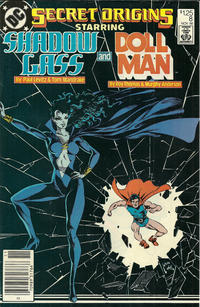 The Shadow of the Past (Table of Contents: 1)

Based on the origin as presented in Feature Comics #27 (Quality, 1939 series). Last page has note by Murphy Anderson crediting Will Eisner as the biggest influence on his career.