[Fingers of Fear] (Table of Contents) 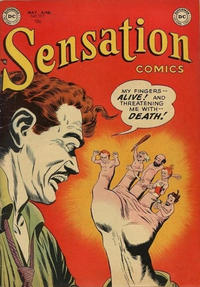 Genre
advocacy; superhero
Characters
Superboy; Frank
Synopsis
Superboy shows Frank that he can be creative, regardless of whether his creations are perfect, and notes an expressive hobby can be life long enjoyment.

Fingers of Fear! (Table of Contents: 2)

Genre
horror-suspense
Characters
Albert Tisdale; Jackson; Emerson; Powers; Duvall
Synopsis
Albert Tisdale kills the other members of his expedition, but then their faces begin to appear on his fingers and try to take their revenge.
Reprints

A Guide to Ghostly Behavior (Table of Contents: 5)

Genre
horror-suspense
Synopsis
What ghosts are able to do.
Reprints

The Beast That Walked Like a Man! (Table of Contents: 6)

Genre
horror-suspense
Synopsis
Charlie Daggett performs as "Panza the Panther-Man" in a circus show. One day he finds out that by taking sleeping pills he can really transform into a panther. Driven by his animal instincts Daggett starts killing off his rivals - until he is hunted down.

The Ferry Was Waiting! (Table of Contents: 10)

Genre
horror-suspense
Synopsis
Doctor Rawlings is transported on a night ferry whose captain died shortly ago. This way the deceased captain pays off a debt to the doctor.
Reprints

Superstitions About Spiders (Table of Contents: 11)

Genre
non-fiction
Synopsis
Beliefs about spiders and their webs
Reprints

The Demon in the Mirror! (Table of Contents: 14)

Genre
horror-suspense
Synopsis
Johnny Peril helps apprehend "deadly" Don Domingo, a killer who employed voodoo magic in his crimes. Domingo can escape from death row by stepping through a mirror and banishing Peril into the prison world. Peril has to do some quick thinking, because the guards plan to execute him instead of the cunning criminal.
Reprints