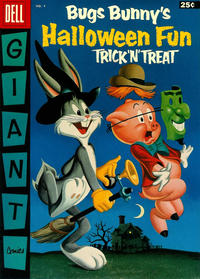 The Haunted Mirror (Table of Contents: 2)

How to Make Your Own Bugs Bunny Boo Book (Table of Contents: 3)

The Scavenger Hunt (Table of Contents: 4)

Almost a Ghost (Table of Contents: 6)

This is considered the first of 23 "Suzanne" comic stories that appeared in Daffy (Duck) and various Dell Giants, 1956-1960. All were drawn by Al Hubbard. This story's plot draws heavily from a 1953 Chuck Jones cartoon, Kiss Me Cat. The character Suzanne originated in Friz Freleng's 1955 film, A Kiddies Kitty.

Though out around the same time as the Suzanne story in Daffy #7, the story here has some introductory elements that the Daffy story does not: The appearance of Suzanne's mother and (version one) father, interacting with the two earlier theatrical guest stars. Suzanne herself is visually and in her dialogue much more similar to Freleng's earlier animated version than she is in Daffy 7, in which the story has the subtle look and tenor of all subsequent "Suzanne" entries.

(Note from Michael Morgan via the GCD Error Tracker.)

The Know-it-all (Table of Contents: 9)

The Lonesome Pumpkin (Table of Contents: 11)

Trick or Retreat (Table of Contents: 14)

The Washed-up Goblin (Table of Contents: 19)

Inside back cover. The Dell Pledge to Parents fills the page