Joe Simon was serving as an editor on a freelance basis at this time. This issue contains work from Al Gabriele, who was a member of Simon and Kirby's studio and not yet on staff at Timely, indicating that Simon edited this issue. 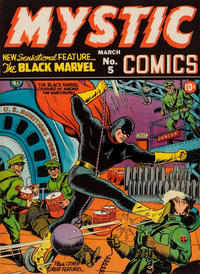 [The Origin of the Black Marvel] (Table of Contents: 2)

Genre
superhero
Characters
Black Marvel [Dan Lyons] (introduction; origin); Chief Man-To (introduction; death); Running Elk; Dan Lyons; Al; Steve; Mickey; Vannie; Jund
Synopsis
The Black Marvel stops a group of criminals who have sabotaged the power plant to provide cover to steal weapons to set themselves up as the local criminal power. In the middle of this story, we see the Black Marvel's origin as a white man who successfully completes the physical trials to take over the position of the dying chief of the Blackfeet tribe after all of the tribe's braves had failed.
Reprints

Note that some sources claim that Stan Lee co-created the Black Marvel, but Lee's first writing credit for a text filler, has been established as being in Captain America Comics #3, with his first comic scripting credit a few issues after that.

Genre
superhero
Characters
Super-Slave (introduction); Cappy (introduction); Jane (introduction)
Synopsis
Cappy (an elderly fisherman) and his daughter Jane are shipwrecked on an island. Cappy scratches an old bracelet he finds on the beach, releasing the Super-Slave who must now do his bidding. Cappy has him rescue Jane, and later needs Super-Slave's services again after they stumble onto a criminal organization.

There is a teaser for another Super-Slave story next issue, but it never appeared.

[The Discovery in the Volcano] (Table of Contents: 4)

Genre
superhero
Characters
Bob Roland (introduction); Carol (introduction); Sub-Earth Man (villain; introduction; origin); Flame Men (villains)
Synopsis
Geologist Bob Roland and his fiancée Carol encounter the giant Sub-Earth Man and his Flame Men beneath a volcano. The Sub-Earth Man ruled the Earth before its crust cooled, and he seeks to cause such massive eruptions that the Earth's surface will be suitable for his rule again. Bob offers to tell him where a city is for him to attack, but tricks him into causing an eruption under the ocean. Bob and Carol escape, but the Sub-Earth Man is still a threat.

There is a teaser for another Sub-Earth Man story in the next issue, but it never appeared.

Introducing the Terror (Table of Contents: 5)

Genre
superhero
Characters
The Terror (introduction; origin); Dr. John Storm (introduction; death)
Synopsis
After witnessing an amazing transformation in his dog, brought on by chemicals, Dr. Storm extracts a serum to grant those powers of fearlessness and a skull-like appearance to a human being. When a man loses control of his car and winds up amnesiac on the doctor's doorstep, Dr. Storm subjects hi to the serum. When gangsters arrive to force Dr. Storm to help them, the stranger wakes up and assumes the ghastly visage of the Terror, killing the thugs. Dr. Storm dies from his wounds, but the Terror vows to continue his fight against crime.

The Legend of the Blackfeet (Table of Contents: 6)

Text with illustrations. Statement of ownership appears at the bottom of the 2nd page.

Genre
superhero
Characters
Black Widow [Claire Voyant]; Satan
Synopsis
Satan asks the Black Widow to collect the soul of train robber Garvey Lang. She stirs up discontent within his gang, causing the deaths of several of them. Finally, the Black Widow delivers her kiss of death to Lang at a costume ball he threw to celebrate his ill-gotten gains.

[The Poisoned Children] (Table of Contents: 8)

Genre
superhero
Characters
Moon-Man
Synopsis
The Moon-Man goes after a racketeer who bought tainted meat for an orphanage so he could pocket most of the money.

Only golden age appearance. Next appearance in All-Winners Squad: Band of Heroes (Marvel, 2011 series) #2.
Plot and some dialogue/layouts lifted from the Face story in Big Shot Comics (Columbia, 1940 series) #1 (May 1940).

[The Story of Mark Todd] (Table of Contents: 9)

Genre
superhero
Characters
Blazing Skull [Mark Todd] (introduction); The Leader (clearly intended to be Adolf Hitler)
Synopsis
Mark Todd is on a passenger liner in the Atlantic Ocean when it is attacked by a sub firing torpedoes. To the astonishment of his fellow passengers, he leaps into the water and deflects the torpedo, changing into the Blazing Skull once he is out of the ship's sight. Returning to the ship he finds a cable summoning him to Berlin. His contact in Berlin has located the enemy's secret weapon. The Skull destroys the weapon but is captured. The leader orders him executed, but the Blazing Skull escapes.

Credits suggested by Who's Who and comparison with signed work by Davis elsewhere.