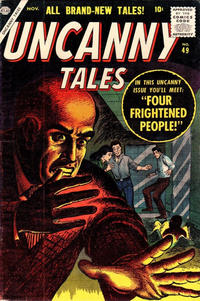 The Man with No Face (Table of Contents: 1)

Job Number
K-719
Genre
fantasy-supernatural
Synopsis
A rich man becomes annoyed when he sees a junk dealer's horse and wagon move in next to him. The end of the story reveals that the neighbor is an earlier version of himself. His success had poisoned the compassion that he used to feel for people, but now that he has faced what he has become, he resolves to turn over a new leaf.
Reprints

Job Number
K-750
Genre
science fiction
Synopsis
A mind reader encounters a disguised alien who comes from a planet rich with gold and diamonds and he decides to blackmail treasure out of him or he'll expose him, however, the aliens easily apprehend him because they all read minds.
Reprints

The Lifeless One (Table of Contents: 4)

Job Number
K-752
Genre
science fiction
Synopsis
An ugly man pours his heart out to a store mannequin who turns out to be an alien spy. She takes him to her world and they live happily ever after.
Reprints

Job Number
G-750
Genre
fantasy-supernatural
Characters
Tommy; Kitty Blake; Old King Cole
Synopsis
A man with no imagination is invited to a costume party by his girlfriend, but stumbles across real fairy-tale folk instead.
Reprints

The Man in the Satellite (Table of Contents: 6)

Footprints to Nowhere (Table of Contents: 7)

Job Number
K-807
Genre
fantasy-supernatural
Synopsis
A man jealous that he won't get the credit for discovering the missing link takes some dynamite to blow it up, but all he succeeds in doing is releasing it and it attacks him.
Reprints