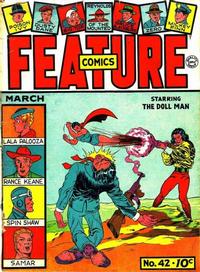 [The Treasure of the Black Albatross] (Table of Contents: 1)

First Line of Dialogue or Text
Where to, Butch?
Genre
humor

Genre
superhero
Characters
USA (introduction, origin); Betsy Ross (flashback); Franklin D. Roosevelt; Otto Fluger (villain, introduction, death); Fluger's un-named spies (villains, introduction for all, all die); Adolf Hitler (villain)
Synopsis
As a young girl in 1777 and around to witness Besty Ross creating the new American flag. She carried some threads of that flag in her locket, and, afterwards, grew very ill and passed away, being buried with that locket. In 1941, the locket was unearthed and when opened, USA was born. With her magic flag and torch of liberty, she showed European loyalists the errors of their ways.

USA was created by Maurice Gutwirth and was Quality's second lady heroine. She was clearly inspired by the early American icon called Miss Columbia, and predated Wonder Woman by about six months.

Script credit suggeseted by the Who's Who.

[The Time Machine] (Table of Contents: 6)

[The Slaver of Bleak Isle] (Table of Contents: 7)

First Line of Dialogue or Text
On your way home, Vincent, stop and get me a bottle of vanilla!
Genre
humor
Characters
Lala Palooza

[Origin of Reynolds of the Mounted] (Table of Contents: 11)

Epic in Bronze (Table of Contents: 12)

[Trapping the Trappers] (Table of Contents: 14)

First Line of Dialogue or Text
I ain't seen your uncle Phil for a week, Mickey, is he sick?
Genre
humor