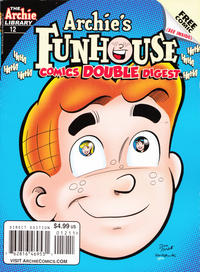 [Archie's Favorite Comics from the Vault] (Table of Contents: 1) (Expand) /

An Odd Way to Get Even (Table of Contents: 3)

Genre
teen
Characters
Archie Andrews; Chuck Clayton; Reggie Mantle; Lavon Jones (baskteball player)
Synopsis
While watching a professional basketball game Reggie is selected for a half-time show, if he can hit a half-court shot he will will $10,000.
Keywords
basketball

Zero to Rock Hero Part One (Table of Contents: 12)

Genre
humor; teen
Characters
The Archies [Archie Andrews; Betty Cooper; Veronica Lodge; Jughead Jones; Reggie Mantle]; Josie and the Pussycats [Josie McCoy; Valerie Brown; Melody Valentine]; Alexander Cabot III; Alexandria Cabot; Mr. Lodge; Luke Ferry (flashback- cameo); Pop Tate; Jess Loonves (president of JBC Television Network); Alan M. Mayberry
Synopsis
Veronica offers to plan a professional party for her father and hires Josie and the Pussycats as the musical entertainment. But when Archie and the gang show up for the party, they threaten to ruin Veronica's plans. She convinces them to play a new video game called "Legendary Rock Heroes". Soon all the guests are watching the Archies play. Josie and her band comes in and gives it a try as well. This leads to a band showdown. Each band wins one set, then both bands are offered a spot on national tv for the final battle.
Reprints

The story continues next issue.

Unscramble the words to find the answer to the mystery question.

The People Person (Table of Contents: 15)

Genre
science fiction; teen
Characters
Archie Andrews; Betty Cooper; Veronica Lodge; Dilton Doiley; Loki (cat); Mr. Weatherbee
Synopsis
Betty and Veronica look at Archie's and Dilton's projects for science project week. Snail-like aliens on a small flying saucer outside the window shrink the foursome so they can abduct them for a flea market. The aliens are distracted and the four have to escape Svenson's cat Loki on a paper airplane that Archie had made earlier. The aliens are ordered back to their home planet and enlarge the teens to normal size before leaving.
Reprints
Keywords
aliens; cactus; cat; flea market; growth ray; paper airplane; shrinking ray; snow

Story is in two parts of six and five pages, but is printed as one long story with no sequences in between the parts. Reference is made to a Little Archie story in Archie Giant Series #560.

The New Moose (Table of Contents: 28)

Unscramble the phrase to find out why Archie and Betty can't enjoy their date at a fancy restaurant.

Fashions for the Guys (Table of Contents: 34)

Fashions submitted by Rachel S. from Virginia and Melissa N. from New York.

Cross out the letters to discover the three most important things to Reggie.

Just a Beginner (Table of Contents: 48)

Assert Yourself (Table of Contents: 49)

[Subscribe to all your favorite Archie comic books today!] (Table of Contents: 50) (Expand) /