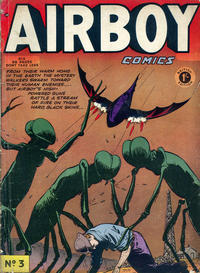 Tomb of the North (Table of Contents: 4)

Blackbeard and the Vulture (Table of Contents: 5)

The Chemical Kid (Table of Contents: 6)

[Voodoo and Vengeance] (Table of Contents: 7)

Genre
horror-suspense
Characters
Ther Heap [Baron Eric von Emmelman]; Captain "Ivory" Williams (steamer Captain); MacPherson (steamer engineer); Oonook (Zuta Elder); un-named Chief of the Zutas; Mr. Stanley; Stanley's assistants [Dalton; Fenwick] (villains, both die)
Synopsis
Two assistants to Mr. Stanley plot to stir up the Zutas to a point where they will assist them in capturing the steamer "Resolute" and the trading post of Ungala. When that occurs, the pair will take control of the territory, unaware that each of them plans to kill the other and become sole ruler!
Reprints
Keywords
Steamer "Resolute"; Ungala; Zutas

Who Has the Ball? (Table of Contents: 8)

Art ID from JVJ Collection. Both Roy and Abel are credited to war stories 1952-53 at Hillman by Jerry Bails' Who's Who, while Woromay is not credited to Hillman.

This reprint includes the indicia at the bottom of the page like the original issue.

The Sawdust Target (Table of Contents: 10)

Zolnerowich is credited to working at Hillman by by Jerry Bails' Who's Who, and this art is exactly identical to his credited story "Color Blind" in Hillman's Crime Detective v1 #10. Compare face and nose page 3 panel 5 with page 1 panel 3 in "Color Blind".

The Riders of the Warheads (Table of Contents: 12)

Art credits from JVJ. Ross Andru is credited to war stories at Hillman by Jerry Bails' Who's Who.

The Ice Frogs (Table of Contents: 13)