Man in the Dark! (Table of Contents) 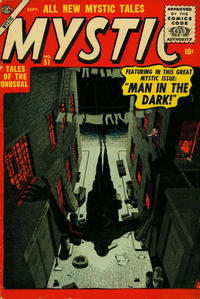 Man in the Dark (Table of Contents: 1)

Morales credit per Jim Vadeboncoeur Jr. via atlastales.com. Story similar to the Lee-Ditko story in Tales to Astonish 40.

No One Will Ever Know! (Table of Contents: 2)

Job Number
K-15
Genre
adventure
Synopsis
An explorer is disappointed to find an apparent city of gold hidden in the jungle only to be told that the samples he has returned with are fool's gold. He is unaware that the area he crossed to get to the city was a large diamond field.
Reprints

Think! If You Dare (Table of Contents: 3)

Job Number
J-974
Genre
science fiction
Synopsis
A dictator gets a machine that allows him to read the thoughts of his subjects and throws thousands in jail. When the inventor's own family is imprisoned, he fixes the machine so that it produces false results and the dictator's loyal guards are thrown in jail. Angered, they reject his leadership and revolt.
Reprints

Behind the Door (Table of Contents: 4)

Job Number
J-858
Genre
science fiction
Synopsis
A scientist pulls his ancestor from the past thus wiping himself out of existence.
Reprints

The Salesman (Table of Contents: 5)

Wings in the Night! (Table of Contents: 6)

Job Number
J-940
Genre
fantasy-supernatural
Synopsis
An eagle disguised as a man coordinates his fellows into helping out with various disasters.
Reprints

The Imperfect Plot (Table of Contents: 7)

Job Number
K-12
Genre
science fiction
Synopsis
A man takes a spacecraft that travels close to the speed of light to wed an alien princess fifty light years away, but she rejects him as he is now almost ninety.
Reprints