The Secret of Superman Island! (Table of Contents) 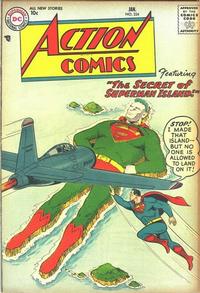 The Secret of Superman Island! (Table of Contents: 2)

The Golden Gorilla (Table of Contents: 5)

Genre
jungle
Characters
Congo Bill; Janu; The Golden Gorilla (intro)
Synopsis
Congo Bill meets a golden gorilla that seems to be intelligent and has to protect it from hunters.
Reprints

May be same Golden Gorilla as Congorilla, may be not.

Daredevils of the Deep (Table of Contents: 10)

Genre
science fiction
Characters
Planeteers; Cadet Tommy Tomorrow (in flashback to origin only); Prof. Todd (in 2056 and in flashback); Captain Jon Hale (mentioned)
Synopsis
In 2056, Prof. Todd recalls the first tour of the Seven Wonders of the Universe, in which the senior cadet from the Planeteer Prep School who solves a mystery will be promoted to the Planeteer Regulars. Tommy Tomorrow correctly deduces that the secret is a comet whose tail causes things to temporarily become invisible. He becomes the first cadet ever to solve the mystery.
Keywords
Geometric Asteroids; Glass World; Planeteer Prep School; Planeteer Regulars; Sargasso Jungle of Space; Seven Wonders of the Universe [Venus Statue; the Nameless Wonder]; Venus; Water Wonder; Water World; X-Ray Crater; X-Ray Moon

(1) This flashback tale tells about cadet Tommy Tomorrow's graduation from the Planeteer Prep School. (2) Chronologically, the events in Showcase #41 follow the flashback portion of this story. (3) According to the editorial page in DC Special #27 (Apr-May 1977), the story in that issue occurs in 2056 during the height of Tommy's career, placing it somewhere between Action Comics #212 and #226. Given that the Tommy Tomorrow of 2056 is not depicted in his own feature in Action Comics #224 (he appears only in flashback to an earlier time), it is logical to assume that his exploits in DC Special #27 occur during that absence. (4) A statue is depicted honoring Capt. Jon Hale as the first spaceman to land on Venus in 1981.