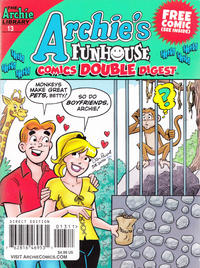 You Never Know (Table of Contents: 3)

Genre
teen
Characters
Dilton Doiley; Reggie Mantle; Archie Andrews; Betty Cooper; Veronica Lodge; Pop Tate
Synopsis
Dilton has a crush on Veronica, but his attempt to convince her that they should be together has a significant flaw.
Reprints

In the original printing of this story, Script is credited to Jim Ruth and Inks to Chic Stone.

After her guitar solo, when nobody claps, Josie says "I guess you guys are not ready for that, but your kids are gonna love it", a quote from Marty McFly in the movie "Back to the Future".

Time Will Tell (Table of Contents: 20)

Bypass the Gas (Table of Contents: 21)

Genre
teen
Characters
Jughead Jones; Gladys Jones; Forsythe Jones; Jellybean Jones; Archie Andrews; Veronica Lodge; Hiram Lodge; Hermione Lodge
Synopsis
Jughead's family goes to a new superstore and buys so much stuff in bulk that there is no place in the house to store it all.
Reprints

A maze in the shape of Archie as an astronaut.

Archie Comics has typically changed the "Big Moose" logo to just "Moose" in recent years but it is left intact for this printing.

Genre
science fiction; teen
Characters
Archie Andrews; Veronica Lodge; Jughead Jones; Betty Cooper; Moose Mason; Dilton Doiley; Chip; UB-12
Synopsis
Archie and the Riverdale gang go along on a trip to the Kennedy Space Center with a group of elementary students studying to be Young Astronauts. Along the way, one of the students has a dream about their bus traveling to outer space.
Reprints
Keywords
astronauts; dreams; Kennedy Space Center; Young Astronaut Council

The Young Astronaut Council was established by the White House in 1984 in an effort to promote greater proficiency and interest in science, math and technology using space as the underlying theme.

Pranks for the Memories! (Table of Contents: 29)

Genre
teen
Characters
Reggie Mantle
Synopsis
Reggie asks his mirror who is the fairest of all, causing the mirror to break.
Reprints

The One and Only (Table of Contents: 42)

Genre
teen
Characters
Moose Mason
Synopsis
Moose is looking for a hole in the roof.
Reprints

[Subscribe to all your favorite Archie comic books today!] (Table of Contents: 50) (Expand) /