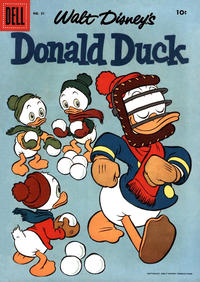 The Secret of the Glacier (Table of Contents: 2)

Genre
anthropomorphic-funny animals
Characters
Uncle Scrooge; Huey, Dewey and Louie; Black Pete; Scupper; Donald Duck
Synopsis
Donald and the nephews take a side trip to a remote cove, but are stranded by a landslide. Meanwhile, Scrooge is taking a cruise to Glacier Bay, but gets pulled overboard by a huge salmon while fishing. He is rescued by Black Pete and Scupper who are nearby poaching salmon with a net. Scrooge talks in his sleep about having to reach Glacier Bay and Pete puts into Seal Bay, which is where Donald and the nephews are stranded. Pete decided to take the whole bunch to Glacier Bay to see why Scrooge is so determined to get there.
Reprints

The Pesky Pelican (Table of Contents: 3)

The Magic Box (Table of Contents: 4)

The Star Gazer (Table of Contents: 5)

Genre
anthropomorphic-funny animals
Characters
Donald Duck; Huey, Dewey and Louie
Synopsis
Donald is not home when the boys come from school, but he has left signs in various places telling them what they are to do.
Reprints