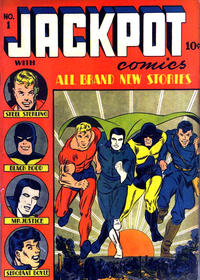 [The Green Eggs of Doom] (Table of Contents: 1)

Art originally credited to Charles Biro. Comparing the faces of Clancy and Looney with the signed Biro story in Zip #12 and signed Novick story in Jackpot #3, they are different from Biro's. Clancy's eyebrows and chin match Novick, as do Looney's long face. The figure of Sterling is shorter and stockier built in Biro's story, and his movement different. Sterling's face is not far off Biro's.
Title taken from ad for comic in Blue Ribbon Comics #15.

The Case of the Millionaire Sailor (Table of Contents: 2)

[The Corpse Was Wrapped in Seaweed] (Table of Contents: 3)

Originally credited "Warren King?", but the square faces with a scowling mouth can be found in many Camy stories at this period, like in Top-Notch #13. He is credited on this feature by Jerry Bails' Who's Who.

Title taken from ad for comic in BLUE RIBBON COMICS #15.

The Suicide Who Died Twice (Table of Contents: 4)