The Ice Monster (Table of Contents) 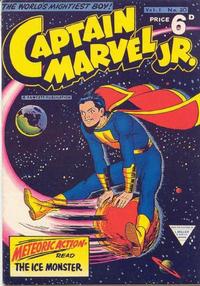 Letter announcing Captain Marvel Jr.'s decision to retire into the form of Freddy Freeman, "to allow Freddy the chance to live an ordinary life, like any other young boy or girl," and the upcoming launch of the Marvelman Jr. comic book series.

No Dough But Nuts! (Table of Contents: 7)

Announcement of the end of the Captain Marvel Jr. Club as of Jan. 31, 1954 and the transfer of all its members to the New Marvelman Jr. Club.