He-Man and the Masters of the Universe; Harry Potter / cover / 1 page (report information) 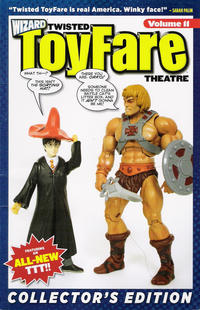 Head of the Class (Table of Contents: 1)

This is a parody advertisement of the medicine Mylanta.

Smuf City A Smurf to Kill For (Table of Contents: 3)

Genre
humor
Characters
Hefty Smurf; Goldie Smurf; Greedy Smurf; Yellow Bastard [Allstar Seaworthy]; Gargamel; Smurfette; Hooker Smurf; Ninja Smurf; Brainy Smurf; Papa Smurf; Jokey Smurf
Synopsis
Hefty finds Goldie has been turned to gold, and he is being framed. He gets information from Greedy and Yellow Bastard, which leads him to Gargamel, but he is innocent. He's captured by Smurfette, who thinks he killed Goldie, but she lets him go. He goes to see Brainy, and finds out it was Brainy who has been turning Smurfs to gold. He fights him, and then finds out Papa Smurf was behind it all. He kills Papa and gets sentenced to the electric chair. Then Jokey comes and says it was all a joke. Hefty is already dead.
Reprints
Keywords
action figures; eBay; electric chair; fumetti; Greedy's Club Pecos; Smurf City P.D.; Twisted Toyfare Theatre

This story is a parody of Sin City, and the coloring is done in the same style: black and white with some color highlights.

One Flew Over the Dooku's Nest (Table of Contents: 4)

Genre
humor
Characters
Darth Vader; Nurse Binks; Ki Adi Mundi (force ghost); Boba Fett; Shakey Pete; Jabba the Hutt; Green Stripey; Emperor Palpatine
Synopsis
After freezing Vader in carbonite, the stormtroopers are sentenced to community service. They go to Chancellor Valorum's Memorial Home for Elderly Clone Troopers. Boba Fett comes to visit his uncles. After seeing the bad treatment of the elderly, they break out the patients. They allow them to do whatever they want. One wants to make out with someone and one wants to shoot a Jedi. They go to Kamino to clone new bodies. Most die before they're cloned, but one survives. Palpatine find out and punishes them by making them bathe him.
Reprints
Keywords
action figures; carbonite; catheter; Chancellor Valorum's Memorial Home for Elderly Clone Troopers; drugs; Emperor Palpatine; fumetti; Kamino; morgue; Order 66; Thanksgiving; Twisted Toyfare Theatre

The Golden Rage (Table of Contents: 6)

Genre
humor
Characters
Spider-Man; Thor; Spider-Man (greatest hero of 1945); Tarantula; Green Goblin; Mysterio; Lizard; Bin Laden
Synopsis
In order to get to the pizza rolls in the freezer, Spider-Man has to unfreeze Spider-Man, the greatest hero of 1945. The Spider-Men go to stop crime, but the old one can't determine what is a crime in current time, and kills Tarantula. He makes new Spider-Man his sidekick. New Spider-Man turns to the Dark Purple Avengers to take down the old one. Old Spider-Man takes them all down, but when he finds out that America is at war, he goes to Afghanistan and punches Bin Laden.
Reprints
Keywords
action figures; Afghanistan; ATM; Austro-Hungarian; fumetti; pizza bagels; pizza rolls; Qdoba; short-pants; toaster oven; Twisted Toyfare Theatre; web shooters

A Shot at Love with Teela (Table of Contents: 7)

This is a parody advertisement of "A Shot at Love with Tila Tequila."

One character is not yet identified.

Genre
humor
Characters
stormtroopers; Emperor Palpatine; Average Moff Piett; Cloney; Snow; Wilford Brimley
Synopsis
The five stormtroopers are summoned to the moon of Endor to help defend against the Ewok attack. On the moon they ride a speeder bike and get caught in a trap with Wilford Brimley. They are taken to the Ewok village and prepared to be eaten. One trooper is decapitated.
Reprints
Keywords
action figures; beer; Ewoks; Forest Moon of Endor; fumetti; Mr. Potato Head; speeder bikes; Twisted Toyfare Theatre

Genre
humor
Characters
Cloney; Snow; Wilfred Brimley; stormtroopers; C-3PO
Synopsis
One of the stormtroopers convinces the Ewoks he's a god by making fire and killing Wilford Brimley, and they let him go. He mates with C-3PO to get the others released. They all party together. They fight the Empire so the Ewoks don't eat them. After a while, they feel bad, and decide to go back to the Death Star, until they see it has been blown up. They get jobs as drums with the Ewoks.
Reprints
Keywords
action figures; alcohol; Darth Vader; Death Star; drums; Ewoks; fumetti; George Lucas; Jimmy Smitts; lighter; Luke Skywalker; Twisted Toyfare Theatre; Zorba the Hutt

Genre
humor
Characters
Namor; Dr. Strange; Silver Surfer; Hulk; Ancient One; Dr. Doom; Dormammu; Alan Moore
Synopsis
After the Defenders "save" Hulk from a nightmare, the ancient one appears, telling Strange he must renew his position as sorcerer supreme. Strange refuses, and angered, the ancient one decides to train Dr. Doom as the new one. Doom kills his old girlfriend to make his new armor. He trades his soul to Dormmammu for powers. He practices his spell pronunciation. Then he must learn under another master of magic: Alan Moore.
Reprints
Keywords
action figures; fumetti; ham; Hoggoth; Merriam Webster Dictionary; Moondragon; nightmare; Nightmare Lord of the Dream Dimension; time machine; Twisted Toyfare Theatre; Vishanti

This is a parody advertisement for the show "Jon & Kate Plus Eight."

Genre
humor
Characters
Dr. Doom; Reed Richards; Franklin Richards; Dr. Strange; Silver Surfer; Ancient One; Jules Verne; Alan Moore
Synopsis
Doom trains under Richards while Strange tries to get his powers back by breaking his hand with a hammer. Doom has to carry Franklin on his back and go to the astral plane to learn humility. Strange gets Silver Surfer to carry him up a mountain. When Doom must kiss Reed's brain to demonstrate his humility, he refuses and gives the powers back to Strange. But they don't go to strange, they go to Franklin. Strange goes to study under Alan Moore.
Reprints
Keywords
action figures; astral brain; Captain America; cell phone; Dolores Umbridge; fumetti; hammer; Harry Potter; Remus Lupin; Thor; Twisted Toyfare Theatre

This is a parody advertisement of the video games series "Mortal Kombat Vs." and "Street Fighter Vs."

Two characters have not yet been identified, most likely from the Prime and Silver Hawk lines.

Genre
humor
Characters
Mr. Fantastic; Namor; Professor Xavier; Black Bolt; Iron Man; Dr. Strange; Spider-Man; Hulk; Mary Jane Watson; Dr. Octopus; Electro; Mysterio; Bono [Green Goblin]; Thing; Watcher; Wendigo; Phoenix; Leader; Venom; Red Skull; Scarlet Witch; She-Hulk; Wolverine; Hobgoblin; May Parker
Synopsis
The Illuminati's production of Spider-Man: The Musical is way over budget and the lead actor has walked out. They convince Spider-Man to fill in by explaining if he doesn't, he will be owned by Broadway. He is unimpressed with Mary Jane. His villains fill in as the crew. Bono has written the songs. There is no time to rehearse, so Spider-Man is thrown on the stage without knowing the lyrics. Bono dresses up as Green Goblin and attacks Spider-Man and Mary Jane for ruining his songs.
Reprints
Keywords
action figures; Andrew Lloyd Web-Head; Broadway; fumetti; Lucky Charms; meatloaf; Twisted Toyfare Theatre; U2; union

Two characters in the audience have not been identified.

Inceptors of the Universe (Table of Contents: 20)

Genre
humor
Characters
Beast Man; Skeletor; Evil-Lyn; Mer-Man; Tri-Klops [Man-at-Arms]; Trap Jaw
Synopsis
Skeletor plans to find out for sure if Prince Adam is He-Man by taking him in a dream that is in a dream that is in a dream, etc. They capture He-Man and Tri-Klops impersonates Man-at-Arms. He is about to reveal his secret when Skeletor moves them to the next dream. Trap Jaw is in charge of the next one, and he is a somnambulist. The room shakes.
Reprints
Keywords
action figures; cosmic key; dream; fumetti; Inception; mustache; sandwich; somnambulist; totem; Twisted Toyfare Theatre

Inceptors of the Universe Part 2 (Table of Contents: 21)

Genre
humor
Characters
He-Man; Evil-Lyn; Skeletor [Faker Skeletor]; Tri-Klops [Man-at-Arms]; Trap Jaw; Fisto; Zodak; Orko; Conan; Sy-Klone
Synopsis
In the dreams, Skeletor pretends to be Faker Skeletor, and He-Man follows them to "rescue" Randor. They only have minutes before Trap Jaw wakes up. Beast Man is fighting in one dream level, one level is in space, and then in the current level He-Man is killed by Orko, who is Skeletor's ex-lover. They take He-Man to a vault where they hope he would project his secret identity, but he only projects He-Man dancing. They all wake up, except now Skeletor is in his own dream.
Reprints
Keywords
disco; fumetti; New Adventures of He-Man; totem; Twisted Toyfare Theatre

Harry Potter and the Crux of the Matter (Table of Contents: 22)

Genre
humor
Characters
Draco Malfoy; Harry Potter; Voldemort; Narcissa Malfoy
Synopsis
Harry asks Draco to meet him because he discovered something shocking about his past. He says Voldemort and Narcissa had an affair, then, as he was dying, Voldemort asked her for a favor. This is all a set-up so Harry can call Draco's mom a horcrux.
Keywords
action figures; fumetti; horcrux; magical pope; Twisted Toyfare Theatre; unicorn

This story was never previously printed in any Toyfare magazine or any of its specials.