First edition is known to exist as untrimmed, with a 1/4-inch white bar around 3 sides that was never trimmed.

As stated in Mark James Estren's "A History of Underground Comics," this was actually published after Zap #2 came out in 1968. The artwork for this issue was lost after the publisher who had it moved to India. Luckily, Crumb had made xeroxes which he managed to locate months later. Crumb did get the original artwork back several years later.

First Line of Dialogue or Text
The Comic That Plugs You In!!
Reprints
Keywords
adult 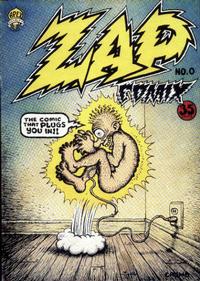 Mr. Sketchum Is at it Again! (Table of Contents: 1)

Sequence is on inside front cover. This page is signed by Crumb at the bottom and dated October 1967.

Itzy and Bitzy in "Cause and Effect" (Table of Contents: 4)

Yarrowstalks was a Philadelphia underground tabloid.

This originally was a Crumb sketchbook strip from 1967

Freak Out Funnies (Table of Contents: 10)

City of the Future (Table of Contents: 11)

Sequence on inside back cover.