One page is missing from this collection – a strip that was originally absent in The New York Herald run but was in fact published January 7, 1906 in other US newspapers (including the Chicago Record-Herald and Los Angeles Times) and also the Paris edition of The New York Herald (see intro by Bill Blackbeard to vol. 6 (1913-1914) of the Fantagraphics Complete Little Nemo in Slumberland). This strip was reproduced in the frontispiece to vol. 1 (1905-1907) of the same series. 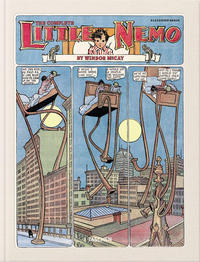 Box with handle used to contain the book. Two Little Nemo strips reprinted in full on either side of the box.