The Moving Walls! (Table of Contents) 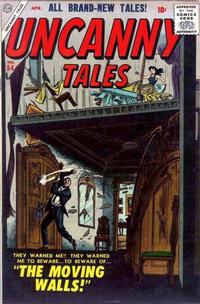 Mystery in Midville (Table of Contents: 1)

Job Number
L-733
Genre
fantasy-supernatural
Synopsis
A petty thief comes across a city where every person is considerate and helpful. The man who takes him in tells him not to touch a certain box as it took him fifty years to gather its contents. The thief thinks that it must be very valuable and so opens the box that belongs to Pandora.
Reprints
Keywords
Pandora's Box

Inspired by the Greek myth of Pandora's Box. (Note by Tom Lammers)

The Warning! (Table of Contents: 2)

Job Number
L-828 ?; L-888 ?
Genre
science fiction
Synopsis
A scientist recreates the serum that gave Midas his golden touch and feeds it to his dog. Anything the dog touches turns to gold and he donates the gold to help people. Another man with greedy intent breaks in and unlocks the dog's cage. While the two men are locked in a struggle, the dog touches them and they are transmuted into gold. The statue is displayed as a moral lesson for people of the struggle between selflessness and greed.
Reprints

The Hidden Island (Table of Contents: 3)

Job Number
L-751
Genre
fantasy-supernatural
Synopsis
A man ventures out to a mist-hidden island that has curative properties in order to marry a couple there.
Reprints

The Remedy Oil (Table of Contents: 4)

Inside the Tomb! (Table of Contents: 5)

The Terrible Fate of Mr. Wren! (Table of Contents: 6)

Job Number
L-797
Genre
science fiction
Synopsis
A scientist puts off marrying until he is wealthy because he wants to avoid the mistake of his parents always arguing since they were poor. He becomes wealthy by inventing a matter duplicator device. When the girl he wishes to marry steps in front of the device, there are now two of them, arguing over which one of them gets to marry him.
Reprints

The Moving Walls! (Table of Contents: 7)

Job Number
L-778
Genre
crime
Synopsis
An engineer builds a castle as a monument to man's greed that will collapse unless a beam of light shines directly upon a diamond that thieves attempt to steal in succession. Each thief must sit in place holding the diamond in the light until the next greedy man comes along otherwise the castle will collapse upon their heads.
Reprints