Black September
This issue has variants:

Black cover with only the Exiles logo in purple on it. 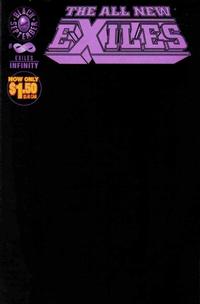 Into the Breach (Table of Contents: 1)

Genre
superhero
Characters
Juggernaut; Siena Blaze; Reaper [Pantu Hurageb]; Amber Hunt; Shuriken [Brittany Chien]; 'Strike [Brandon Tark]; Tradesman
Synopsis
Huge simultaneous power expenditures by Siena Blaze and Amber Hunt throw them and the people they were fighting into the void between dimensions where Juggernaut was trapped. Amber and Siena collide and the entire group is dropped into the Ultraverse on an alien planet. They are attacked by dinosaurs who turn out to be robots. After the battle, Reaper runs into Tradesman who apparently suggests how they can teleport again. Reaper forms a circuit between Amber and Siena with his energy channeling sycthe (without warning or permission) and the entire group is again transported.