As billed on the cover, this issue contains three pages listing the winners of the DC Slogan Contest (whose last names begin with O, S, V or Z). These pages replace some of the usual fillers for this issue.

The Face Behind the Mask! (Table of Contents) 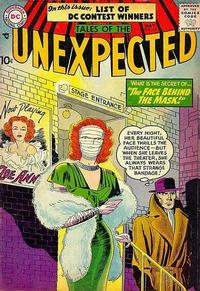 Weapons of Destiny (Table of Contents: 2)

Genre
detective-mystery
Synopsis
A man with no memory is compelled to steal three weapons, but he doesn't know why. When he sees Professor Desmond on television, he senses he can solve the mystery. And he does, by telling the man he is artist Ted Thorn and he is to draw those weapons for the professor's latest book.
Reprints

Script credit from the index for the World's Finest Comics issue reprinting this story. Binder is not credited in the reprint.

The Thing from the Skies (Table of Contents: 3)

Genre
science fiction
Synopsis
Rupert Corbin sees a small spaceship land, but is told by its inventor that it is only a mechanical prop. Corbin figures he can make money to pay back his gambling debts from pictures of the craft anyway, and kills Professor Lucas to do it. But Corbin is visited by small space travelers who reveal that Lucas was their contact on Earth and they take him home to their planet to face justice.
Reprints

Genre
fantasy-supernatural; war
Synopsis
Pete Newell returns to the battlefields of World War II where he is saved from angry locals by ghostly help.
Reprints

I Was a Prisoner of the Supernatural (Table of Contents: 6)

Writer credit taken from the reprint.

The Face Behind the Mask (Table of Contents: 7)

Genre
detective-mystery
Characters
Zoe Ann Kerns; Freddie White; Jay Hamilton
Synopsis
Jay Hamilton woos an actress who spends each night with her face covered in bandages. She claims to be 300 years old and to have a magic potion that keeps her young for a short period of time. Since she has run out of the potion, Jay and his father accompany her to meet the sorcerer who sells her the elixir, but Zoe Ann admits it's all a scam and the men turn the "sorcerer" over to the police.
Reprints

A Date with Effie (Table of Contents: 9)