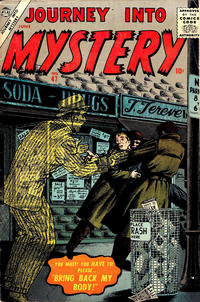 Bring Back My Body (Table of Contents: 1)

Job Number
M-9
Synopsis
When a man in a trance gets into an astral duel with another, the strain proves too much for his body.
Reprints

It Hides Under the Ground (Table of Contents: 2)

Job Number
L-938
Synopsis
A coward cooks up a scheme to swindle two old men out of paying for a fake chariot of Odin, but when his workers dig in another spot in the cave where he planted the fake chariot, they uncover the real thing and it takes him to Valhalla to fight battles for eternity.
Reprints

Wessler script per Nick Caputo from biblio info in Robin Snyder's The Comics, Vol 25, No. 4, April 2015. Shores credit per Atlastales.com

They Can't Find Me (Table of Contents: 3)

Job Number
M-1
Synopsis
A scientist invents an invisibility serum that only renders the one who imbibes it invisible to himself.
Reprints

The Blinding Flash (Table of Contents: 4)

Job Number
L-955
Synopsis
When a scientist invents a device that allows an image to be projected into the past that can retrieve objects, a crook uses it to pick up a lighter with his initials that he dropped at the scene of his robbery, but he gets arrested anyway because a detective also used the machine and observed him in the act of his crime.
Reprints

The Face in the Darkness (Table of Contents: 6)

Job Number
L-932
Synopsis
A man who goes to mediums looking to speak to a non-living relative thinks the swami who conjures a spirit is fake because the spirit can answer none of his questions. Only many years later does he learn that his experience with the swami was genuine as he is introduced to the spirit's likeness, a relative who had not been born yet, and thus was unable to answer any of his questions.
Reprints

He Sits In the Fog (Table of Contents: 7)

Job Number
L-730
Synopsis
A murderer meets his end in the gas chamber still thinking that he has fooled everyone and committed the perfect crime.
Reprints