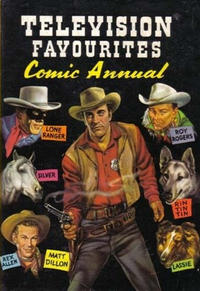 Table of contents with Matt Dillon below holding his revolver pointing upwards.

First Line of Dialogue or Text
As Matt Dillon watches a freight stage swing out of Dodge City, suddenly...
Genre
western-frontier
Characters
Matt Dillon; Chester; Kitty
Synopsis
Matt suspects that Curry, the area's largest freight hauler, is having his men sabotage his rivals' stages to put them out of business, but has to find evidence to make the charges stick.
Reprints

Script, pencils, inks, and letters credits for this sequence from Alberto Becattini (May 14, 2007).

The Hunter's Prey (Table of Contents: 6)

Job Number
LASSIE #25-5511
First Line of Dialogue or Text
Cheers, Lassie's jaguar friend, is teaching her half-grown cub how to hunt,
Genre
animal; jungle
Characters
Lassie; Cheena (jaguar); Rocky; Gerry; Mark Gorin
Synopsis
Mark Gorin, a trophy hunter, visits the homestead with plans to shoot a jaguar. Having his eyes set on Cheena and her cub, he doesn't count on Lassie being a friend of the jaguar.
Reprints

Art credits for this issue from David A. Roach via Steve Whitaker.

Silver and the Wings of the Wind (Table of Contents: 8)

First Line of Dialogue or Text
It is early summer in Benton City and the townsfolk gather for the annual fair and rodeo...
Genre
western-frontier
Characters
Roy Rogers; Trigger (horse); Sarah Benton; Jim & Jud Brant (twins)
Synopsis
One of the twins holds up the stage, while the other gives him alibi
Reprints

The Threat (Table of Contents: 10)

First Line of Dialogue or Text
Hey, Sergeant -- Corporal -- what are you doing?
Genre
animal; western-frontier
Characters
Rusty; Rin Tin Tin; Sergeant O'Hara; Lt. Ripley 'Rip' Masters; General Cummings
Synopsis
A new general is arriving and he doesn't seems to like dogs and boys, or anything else.
Reprints

Rear endpapers showing Matt Dillon in foreground on horseback, Roy Rogers and the One Ranger in background on horseback, Rex Allen sitting on fence holding a lasso with Lassie in front of him running and Rin Tin Tin peering through the fence from the other side. Identical to front endpapers.