Indexed from scanned copy at http://www.collectionscanada.gc.ca/comics/027002-5100-e.html

On sale date from Dime Comics #26.

Rex Baxter and the Island of Doom (Table of Contents) 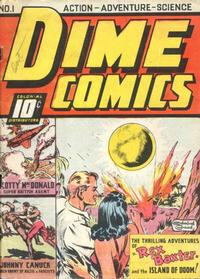 Introducing Rex Baxter and the Island of Doom (Table of Contents: 2)

First Line of Dialogue or Text
Rex Baxter adventurous young soldier of fortune is returning aboard the S.S. Luxor to enjoy a well-earned leave from duty with the British army in northern Africa---
Genre
science fiction
Characters
Rex Baxter; Gail Abbot
Synopsis
Rex and Gail's ship is attacked by a German submarine and they are attacked by a giant ray in the water. They make it to an island where they have to deal with being marooned.
Reprints

Each page appears to be signed, possibly artwork was originally intended as comic strips but re-purposed for comic book. Continued in next issue.

What Is Wrong With This Ship? (Table of Contents: 3)

Genre
war
Synopsis
Win Khaki & Nickel Army flashlights for finding problems with a picture of a ship and submitting the answers.

Some of the lettering is reminiscent of Legault's work.

First Line of Dialogue or Text
Johnny Canuck Canada's answer to Nazi oppresion is now devoting his great physical powers for the destruction of Hitler's forces in Libya.
Genre
adventure
Characters
Johnny Canuck; Lola; Baron Von Reichmann; Winston Churchill; Adolf Hitler
Synopsis
Johnny Canuck is flying over the Libyian jungle and runs into a German patrol. He is forced to bail out and is captured by barbarians. He defeats their tyrant king and the people help him defeat a group of Germans.
Reprints

Hitler appears in one panel at the end.

Oppression is misspelled in the first line.

The Old Act Was Much Better (Table of Contents: 6)

Information on storage barrel ants, Ming tombs and a cable railway in the Bavarian Alps.

Last name of main character alternates between Mc and Mac.