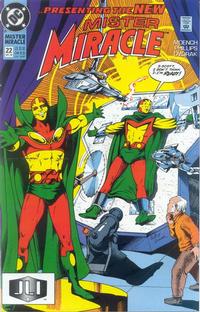 Passing the Miracle (Table of Contents: 1)

Big Barda does not appear in her costume in this story. Shilo Norman becomes Mister Miracle for the first time in this issue. Paula Abdul, late 80's pop star who became host of TV's smash hit American Idol, is mentioned in this issue as sounding like Shilo Norman's new Mother Box.