The red and blue colors of the Thunderer's costume are reversed on this cover. 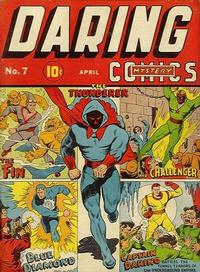 First Line of Dialogue or Text
We give you... The Thunderer
Genre
superhero
Characters
The Thunderer [Jerry Carstairs] (introduction); Eileen Conroy (introduction); Nazis (villains)
Synopsis
Jerry Carstairs uses his radio skills to intercept Nazi messages and construct the booming voice he uses as the Thunderer. While discouraging his friend Eileen from reporting on the fifth columnists for her own safety by day, by night he protects her and fights against the Nazis as the Thunderer.
Reprints

On the Timely-Atlas list, Dr. Michael J. Vassallo indicated that there might be a different inker on this story.

Introducing the Fin (Table of Contents: 3)

Genre
superhero
Characters
The Fin [Peter Noble] (introduction, origin); Sub-Ruler Ikor of Neptunia (villain, introduction, death)
Synopsis
Lt. Peter Noble is the sole survivor of a wrecked U.S. Navy submarine. As he escapes the wreck he finds himself unable to float and ends up inside a cavern populated by flying mer-men. After he defeats their leader they hail him as the reincarnation of their hero, the Fin, so he puts together a costume to fit the name.
Reprints

[Origin of the Blue Diamond] (Table of Contents: 4)

Genre
superhero
Characters
Blue Diamond [Elton Morrow] (introduction, origin); Graham (introduction); Nazis (villains)
Synopsis
Professor Elton Morrow finds an enormous blue diamond on an Antarctic expedition, but it is shattered when Nazis attach his returning ship and the fragments become embedded in his body. Discovering that his whole body has become as hard as a diamond, he thwarts a burglary at his museum and decides to created a costumed identity for fighting crime.
Reprints

[Origin of the Silver Scorpion] (Table of Contents: 6)

Dr. Michael J. Vassallo notes that this art looks different from the feature in the next issue which Sahle signed under his own name. He speculates the pen name "Jewell" indicated a collaboration with another artist.

The Valley of Time (Table of Contents: 7)

Genre
superhero
Characters
The Challenger [Bill Waring] (introduction, text only)
Synopsis
Bill Waring, traveling the world to learn more weapon skills for his life as the Challenger, is captured by a lost Roman civilization and taken to an arena to fight gladiators armed only with a cestus.
Reprints

Part one of an unfinished story. The Challenger's feature moved to Mystic Comics after this issue, but the second half of this text story did not appear there with it. The bottom half of page 2 features an illustrated ad for Captain America Comics #2.

Captain America Thanks You! (Table of Contents: 8) (Expand) /

[The Benefactor] (Table of Contents: 9)

The Underground Empire (Table of Contents: 10)

Harry Mendryk attributes the art to Kirby alone at http://kirbymuseum.org/blogs/simonandkirby/archives/category/periods/tim..., while others have indicated inking by Simon.

Meet the Challenger (Table of Contents: 12)

According to notes from Dr. Michael J. Vassallo on the Timely-Atlas list, Nicholas (then known as Wojtkoski) may have been assisted by an inker on this story. But contrary to the earlier GCD credit, the inker is not George Klein.