Indexed from scan from http://goldenagecomics.co.uk/.

The Ghoul of Ghost Swamp (Table of Contents) 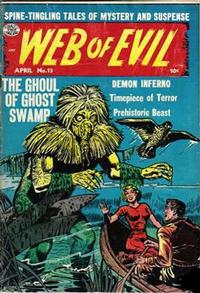 Genre
horror-suspense
Synopsis
Raymond Stevens discovers the abode of inner-earth demons Hate, Violence and Betrayal. They brand him with the devil’s sign and send him back home. Stevens is now ruled by his demons and starts killing people in a satanic rage.
Reprints

Timepiece of Terror (Table of Contents: 2)

Genre
horror-suspense
Synopsis
Horror writer Ward Blake searches for a fabled “bronze clock of Tibet”. When chiming the artifact is revealing projections of terrifying events of history. Blake finally finds the clock in Cairo and kills the owner to get his hands on the timepiece. Ward then uses the clock as inspiration for countless bestselling horror novels. But success comes with a price. The clock begins to drive Blake insane.

Genre
horror-suspense
Synopsis
Museum curator Edmond Manard unfreezes a prehistoric man from an iceberg and brings him back to life by transfusing him his blood. From now on the ice age man goes on a rampage – and Manard experiences the same pain as the creature.
Reprints

From Outer Space (Table of Contents: 4)

Includes Statement of the Ownership, Management, and Circulation at the bottom of the page.

The Ghoul of Ghost Swamp (Table of Contents: 5)

Genre
horror-suspense
Synopsis
“Ghost Swamp” in the Florida everglades is said to host a supernatural ghoulish creature killing all who dare enter. An oil surveying expedition penetrates the swamp and gets wiped out by a swift-acting being in a weird mask. One of the company men donnig a costume is behind the murders, but gets strangled by the real swamp ghoul.