The True Story Of Jesse James (Table of Contents) 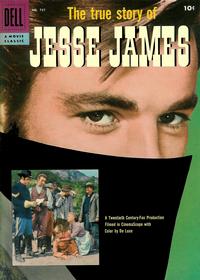 The True Story of Jesse James (Table of Contents: 1)

Inside front cover; black and white. Five photos from the movie and a partial cast list.

The True Story of Jesse James (Table of Contents: 2)

Genre
western-frontier
Characters
Jesse James; Frank James; Cole Younger; Bob Ford; William Quantrill
Synopsis
The last 18 years of Jesse James' life, mostly told in flashbacks. Covers his years with Quantrill's Raiders, his life of crime, the Northfield, Minn., bank robbery that proved the gang's undoing, and finally his death from being shot in the back by Bob Ford.

Story continues on inside back cover in black and white and concludes on back cover in color. Last panel is Dell's "A Pledge to Parents." Adapted from the 1957 Twentieth Century-Fox movie "The True Story of Jesse James." Pencils, inks, and letters credits for this sequence from Alberto Becattini (May 14, 2007)